Little Johny Wanted A New Bike For His Birthday 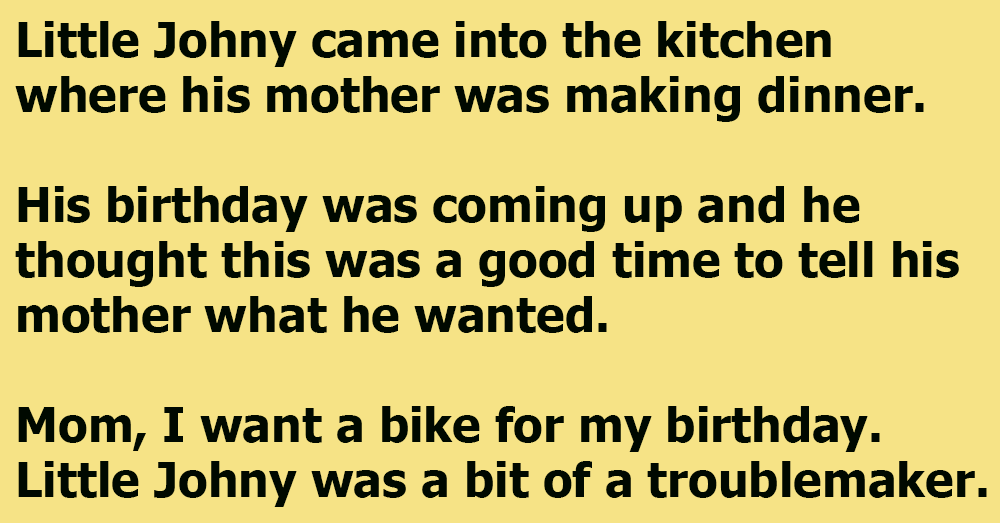 Little Johny came into the kitchen where his mother was making dinner.

His birthday was coming up and he thought this was a good time to tell his mother what he wanted.

Mom, I want a bike for my birthday.

Little Johny was a bit of a troublemaker.

He had gotten into trouble at school and at home.

Johny’s mother asked him if he thought he deserved to get a bike for his birthday.

Little Johny, of course, thought he did.

Johny’s mother wanted Johny to reflect on his behavior over the last year.

Go to your room, Johny, and think about how you have behaved this year.

Then write a letter to God and tell him why you deserve a bike for your birthday.

Little Johny stomped up the steps to his room and sat down to write God a letter.

I have been a very good boy this year and I would like a bike for my birthday.

I want a red one.

Johny knew that this wasn’t true. He had not been a very good boy this year,

So he tore up the letter and started over.

This is your friend Johny. I have been a good boy this year and I would like

A red bike for my birthday. Thank you.

Johny knew that this wasn’t true either. So, he tore up the letter and started again.

I have been an OK boy this year. I still would really like a bike for my birthday.

Johny knew he could not send this letter to God either. So, Johny wrote a fourth letter.

I know I haven’t been a good boy this year. I am very sorry.

I will be a good boy if you just send me a bike for my birthday.

Johny knew, even if it was true, this letter was not going to get him a bike.

Now, Johny was very upset. He went downstairs and told his mom that he wanted to go to church.

Just be home in time for dinner, Johny’s mother told him.

Johny walked down the street to the church on the corner.

Little Johny went into the church and up to the altar.

He looked around to see if anyone was there.

Johny bent down and picked up a statue of the Mary.

He slipped the statue under his shirt and ran out of the church, down the street, into the house, and up to his room.

He shut the door to his room and sat down with a piece of paper and a pen.

Johny began to write his letter to God.

I’VE KIDNAPPED YOUR MAMA. IF YOU WANT TO SEE HER AGAIN, SEND THE BIKE!!!!!!

SHARE now with your friends and loved ones - maybe it will catch them out!

Can You Find The Correct Shadow?